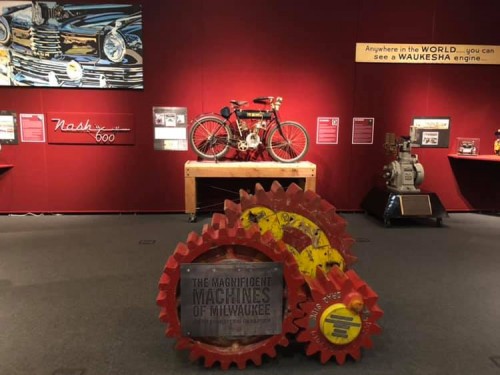 The Grohmann Museum is the recipient of the Wisconsin Historical Society’s 2020 Museum Exhibit Award for its exhibition, “Magnificent Machines of Milwaukee and the Engineers Who Created Them.”

“We have Milwaukee engineers and inventors to thank for many machines including the QWERTY keyboard, motorcycle, thermostat and outboard motor to name a few,” said Christian Overland, Ruth and Hartley Barker Director & CEO of the Wisconsin Historical Society. “The exhibit, ‘Magnificent Machines of Milwaukee and the Engineers who Created Them,’ did a great job of not only showcasing Milwaukee-born equipment and machinery, but also the engineers who created them.”

“Magnificent Machines of Milwaukee and the Engineers Who Created Them” was a temporary exhibition based on the book of the same name by engineer and historian Thomas Fehring. On display September-December 2019, the exhibition traced Milwaukee's history of engineering and innovation from 1860-1960 and included many of the original machines, patents, and models produced during that time.

This exhibition highlighted some of the most significant engineering marvels in Milwaukee's history and includes photographs, documents, ephemera, and a number of the actual machines highlighted in the book by engineer Thomas Fehring, who served as co-curator alongside Museum Director James Kieselburg.

Each year, the Wisconsin Historical Society’s governing Board of Curators recognizes individuals and organizations for meritorious work in areas relating to the Society’s mission. The Board of Curators is made up of 37 elected and appointed members from across the state.