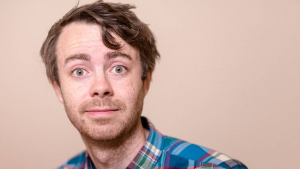 Come get your laugh on after an exciting Week 1! Geoffrey Asmus’s grotesquely self-aware sense of humor has been heard all over the country in the Limestone, Boston, Milwaukee and Cleveland comedy festivals. Geoffrey won Comedy on State’s “Funniest Person in Madison 2015” and Penguins Comedy Club’s “Funniest Person in Iowa 2015” and was a finalist in the 2015 Cleveland Comedy Festival. He has opened for Brian Posehn, Todd Barry, Daniel Sloss, Mark Norman and Cameron Esposito among others.