An MSOE alumnus was featured in a book of oil paintings by former President George W. Bush. Andrew Hillstrom ’14 is one of the 66 military veterans depicted in “A Portrait of Courage: A Commander in Chief ’s Tribute to America’s Warriors.”

“Over the years I’ve had the privilege and honor to get to know President Bush,” said Hillstrom, a Foreign Service Officer for the Department of State. “But surprisingly enough I had no clue he was going to paint me until he had already completed the painting.”

Although he was born in Waukegan, Illinois, Hillstrom grew up in southeastern Wisconsin. From a young age he was drawing and building, and once he was in high school he took every drafting and engineering related course available. When it was time, Hillstrom applied for the AE/CM program at MSOE with the intention to enroll after high school, but changed his mind. “I wasn’t ready to start my college career. I had this drive to see the world and serve my country,” he said.

In 2007 Hillstrom was injured during combat operations in Iraq. “The bomb that caused my injuries tore off a large portion of my right triceps, ulna and elbow, resulting in 17 surgeries.”

After medically retiring from the military in 2009, Hillstrom reapplied to MSOE. He went on to simultaneously earn bachelor’s degrees in architectural engineering and construction management, and a master’s degree in construction business management.

“The single largest challenge I faced was learning not to be limited by my new physical disabilities,” he said. “Not being able to do things like throw a ball or lift weights burdened me greatly. Perceived obstacles such as these prevented me from being very physically active for a while.”

It was several years after his injury that Hillstrom went to a driving range with friends and much to his surprise, he was still able to hit a golf ball. “I was able to modify my swing to accommodate my injuries.” With practice, soon Hillstrom’s golf play exceeded his pre-injury performance. In 2015, he was invited to play in the Warrior Open, a golf tournament hosted by Bush for wounded veterans. 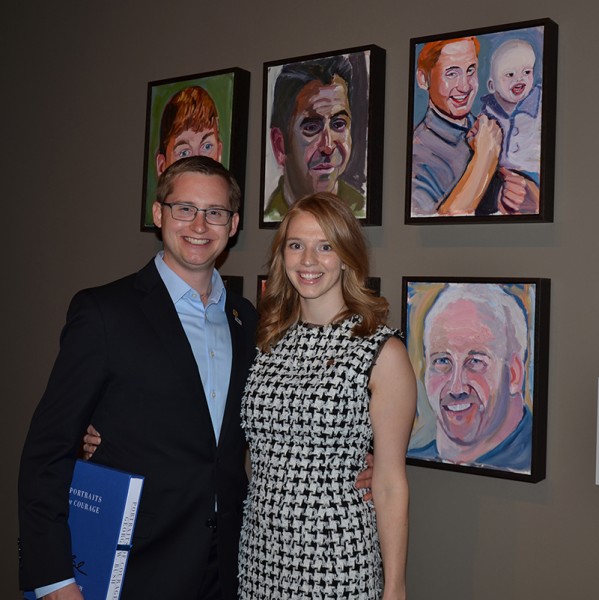 “My decision to continue pushing myself after being injured evolved into being chosen by President Bush for a painting,” he said. “For me, having a purpose in life is what motivates me. After being wounded while serving in Iraq I learned not only the importance of peace through diplomacy, but what it means to have a purpose in life larger than myself.” For Hillstrom, that purpose is service to country.

“The most valuable skillset I acquired at MSOE is problem solving,” he said. “Life’s problems aren’t always easy and don’t happen in a linear fashion. Learning outside-the-box thinking had me well prepared to start my career.”

The most valuable skillset I acquired at MSOE is problem solving. Life’s problems aren’t always easy and don’t happen in a linear fashion. Learning outside-the-box thinking had me well prepared to start my career.