The five members of punk band Past Tense Hero gathered in a Baltimore studio late last fall to make a record. Most of the band members live on the East Coast but their lead singer—Dr. Michael Carriere, an associate professor in MSOE’s Humanities, Social Science and Communication Department—had to catch a plane from Milwaukee.

“The session took three days because we were doing a ‘real’ recording,” Carriere said.

A year earlier, Past Tense Hero recorded a six-song demo in a garage outside of Philadelphia—an effort that took about five hours. “We put the demo up on an online platform and we plan to put out a vinyl of the most recent recording session,” Carriere said.

Carriere, who serves as the director of MSOE’s University Scholars Honors Program and a Carter Academy Fellow, has been playing with the musicians in Past Tense Hero for more than 30 years—back when the band was considered hardcore punk and went by the name Bleed. They reconnected in 2017 for the 25-year anniversary of the band’s founding.

Born in Whitesburg, Kentucky to parents who fought for civil rights and against war and poverty, Carriere became an activist at an early age. Punk rock was an extension of that activism. “It opened me up to a culture that took matters of social justice to heart,” Carriere said. 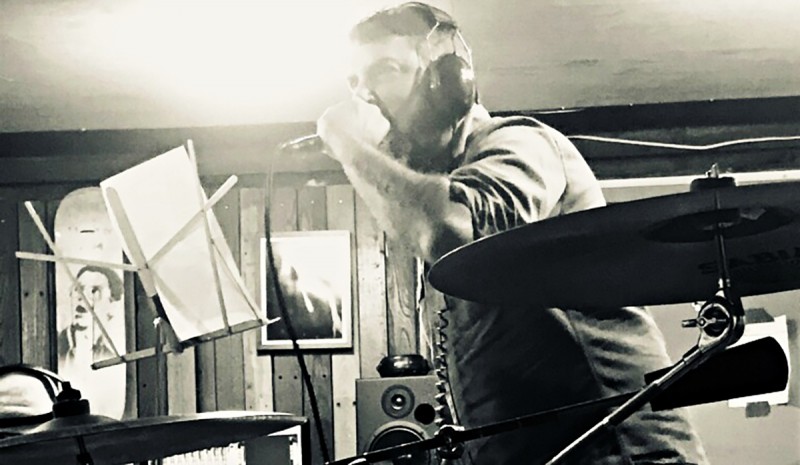 Above: Carriere performing with Past Tense Hero

Carriere toured the country with Bleed after graduating high school. A year later, he enrolled at Hampshire College. “I had no idea what I wanted to do career-wise,” Carriere said. “I was drawn to Hampshire College because you can basically create your own major and there are no letter grades. Instead you get in-depth written evaluations of your work—much more helpful and something I try to provide my students at MSOE.”

Carriere graduated with a bachelor’s degree in history. “I was struck by how much could be explained by history, yet it was something most people paid little attention to,” he said.

Carriere then spent two years as a junior fellow at the Carnegie Endowment for International Peace, a Washington D.C. think tank, before entering graduate school at the University of Chicago and earning a Ph.D. in American history.

“My biggest challenge has been dealing with mental health issues throughout my life,” Carriere said. “I’ve dealt with compulsive behavior and depression and it wasn’t until my late 20s that I started to really deal with it. I try to stress to students there is no shame in getting help for such issues.”

Music is one way that Carriere has intellectually and emotionally processed events taking place in his life and community. One of his songs, “Jihad John,” is about the violence that impacted his life growing up in a neighborhood outside of Philadelphia in the 1980s. Another song, “Dontre,” is about Dontre Hamilton, a 31-year-old man who died after being shot by a police officer in Milwaukee.

“I really see the power of academia to change communities for the better, and I feel a responsibility to share the resources and skill sets that my privilege provides me access to,” he said.

Although Carriere was trained more as a researcher, he has found that he enjoys teaching—particularly taking classroom concepts and applying them out in the community.

“Real-world projects allow students to build actual things while also building partnerships and skill sets—listening to clients, understanding the context of engineering decisions, etc.—that will make them not only better people, but better engineers.”

As for Past Tense Hero—don’t expect another cross-country tour anytime soon—that’s not why Carriere sings. “Chemistry is hard to come by when it comes to band members, so our goal is really just to keep getting together, having fun, and hopefully get our songs out to anyone who might want to hear them.”

When he’s not teaching, Carriere enjoys spending time with his family: wife, Shelly; daughter, Esther; and sons Liam and Aidan. He also enjoys biking, basketball, writing (his work can be found in the Shepherd Express) and travelling.

I really see the power of academia to change communities for the better, and I feel a responsibility to share the resources and skill sets that my privilege provides me access to