When Mike Pancani ’16 returned home to Como, Italy, after graduation, he began playing with a lacrosse team near Milan. Soon after, he was drafted by Italy’s national team and earned a spot to compete in the 2018 Men’s Lacrosse World Cup in Netanya, Israel.

Impressive, especially since he had only picked up the sport a few years earlier at MSOE. 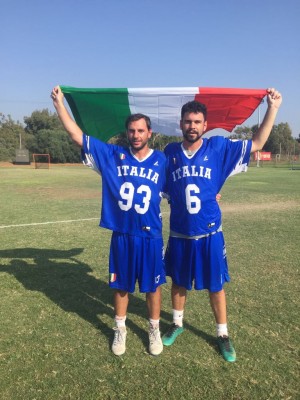 Pancani had hoped to play hockey in college. But he began his freshman year during Winter Quarter, and the hockey season had already begun. Lacrosse was a sport he had heard about, and thought his hockey skills might transfer easily. The timing was right. The team needed players that spring, and Pancani got the opportunity to learn the sport.

“When I came to MSOE, I found there were so many opportunities,” said Pancani. “You can do pretty much anything you want, and everything is included in tuition.”

Pancani first heard about MSOE as a high school foreign exchange student in Appleton, Wisconsin. He was impressed with the smaller class sizes MSOE offered, as well as the multiple hours of practical lab experience.

At MSOE, Pancani found the environment both stimulating and motivating. “The professors were like mentors,” he said. “They were always willing to help. They gave feedback and pushed me to grow.”

Lacrosse also played a big part in his personal growth, he said. “Besides the amazing athletic experience, it was a great opportunity to learn how to manage my time in school, and develop teamwork and leadership skills.”

Pancani didn’t waste any time putting those skills to work. When he found out he could double major in computer and electrical engineering, he thought, why not? He also earned a minor in mathematics. Besides playing lacrosse all four years, Pancani participated in the Student Government Association, Tau Beta Pi Honor Society, Cyber Raider Organization for Networking (CRON), and was a peer and lead tutor at the Raider Center for Academic Success.

Pancani said he was impressed by hardworking MSOE students and would often find motivation from the study floor in the residence hall. “Any time you go there, whether it’s at night, four in the morning or late in the afternoon, somebody’s up there studying.”

After graduation, Pancani returned to Italy to spend time with his family and begin his career. He commutes 50 minutes over the border for a contract position at Paradox Engineering in Ticino, Switzerland. As a firmware engineer, he programs smart electronic radio devices used to connect infrastructures to the Internet, such as street lights, parking sensors and energy meters.

Pancani plans to return to the U.S. to pursue a Ph.D. in electrical engineering and do research in neural prosthetics. “The idea is to record the electrical activity in the brain to decode movement commands and use these signals to control robotic limbs in amputees and patients with paralysis,” he said. “Basically, being able to control prostheses with pure thought alone—like Darth Vader in Star Wars.”

When I came to MSOE, I found there were so many opportunities. You can do pretty much anything you want, and everything is included in tuition.