Make a contribution to MSOE
in memory of Dr. Viets

Dr. Viets died peacefully in his sleep on Oct. 1, 2017 at his home in Rhode Island. He served as president of MSOE from 1991 until his retirement in 2015. He was only the fourth president in the 114-year history of MSOE. Under his leadership, the campus footprint grew dramatically and the university added several degree programs that fueled enrollment. In his retirement, he continued to serve MSOE as a member of the Board of Regents.

“Dr. Viets was a rare individual whose humble beginnings provided the very foundation that allowed him to lead MSOE to academic prominence,” said Dr. Scott Moon, chairman emeritus of the MSOE Board of Regents. “His leadership style combined a relentless work ethic, pragmatism and deep strategic thinking with a highly engaging personality. These traits allowed him to easily connect with others and enlist their assistance in fulfilling a creative vision for MSOE.”

Dr. Viets’ vision for MSOE was to remain at the forefront of professional education with an emphasis on both theory and technology coupled with an intensity of appropriate laboratory experience and career practice. He worked to broaden the academic scope of the university while maintaining its “application-oriented” philosophy and at the same time supporting those initiatives that promote a well-rounded college experience.

“Hermann was an imaginative leader who could identify opportunities and enlist support to advance MSOE by making bold, yet thoughtful improvements. He strongly believed in MSOE’s application-based focus which is at the heart of what makes MSOE graduates highly sought after leaders in their respective fields,” said Moon. “At one of my businesses we hired our first MSOE student in 1995 as an intern. We recently named him president of that company and have since named other MSOE graduates to leadership roles in my other business. In many ways, MSOE students model Hermann’s talent, character and can-do spirit. I will miss him as both a leader and friend and my thoughts and prayers go out to his family and friends.”

Other highlights of Dr. Viets’ career include the establishment of the Rader School of Business and MSOE School of Nursing. MSOE became the state’s National Affiliate University for Project Lead The Way when the program was introduced in Wisconsin. In addition, the Pieper Family Endowed Chair for Servant-Leadership and Uihlein/Spitzer Chair of Entrepreneurship were established.

Dr. Viets received a Bachelor of Science in Aerospace Engineering, and both a Master of Science and Ph.D. in Astronautics, all from Polytechnic University in New York City and Farmingdale, Long Island. He was a visiting scientist, aerospace engineer and research group leader for Wright Patterson Air Force Base Aerospace Research Laboratories in Dayton, Ohio; lecturer at the Von Karman Institute in Brussels, Belgium; and a research associate at the Polytechnic Institute of Brooklyn, N.Y. His other academic experience included serving as dean of engineering at the University of Rhode Island in Kingston; associate dean for research and professor at West Virginia University, Morgantown; and professor of engineering at Wright State University, Dayton, Ohio.

In 1997, Dr. Viets was named “Engineer of the Year” by Engineers & Scientists of Milwaukee Inc. (known today as STEM Forward), He also received the 2008 World Citizen Award from the International Institute of Wisconsin and the 2014 CTSI Bolger Award. He held seven U.S. patents, and was chairman of the board at AstroNova. 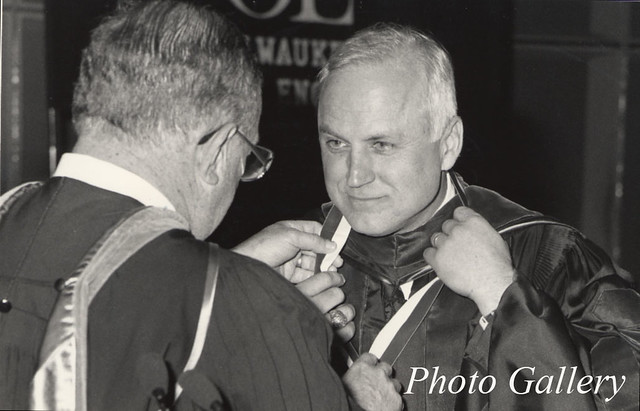