At 17, MaKisha Williams ’15 graduated early and enrolled at MSOE to study biomedical engineering. She’d always loved math and science, and her late uncle had lobbied hard for her to go to MSOE because he knew of the university’s stellar reputation.

“I always tell people: I wouldn’t go to McDonald’s to get a taco,” she says with a laugh. “If you’re looking at a STEM degree, it really doesn’t make sense to go anywhere else.”

But it didn’t work out. “My head wasn’t where it needed to be,” she explains. She pulled out freshman year and got a job working for the City of Milwaukee’s engineering department. “I started working with a slew of engineers, and the only thing that separated me from those guys was that piece of paper,” she says. “It became a hindrance.”

By then her father and significant other had both passed away. “It made me realize that life’s too short not to pursue your dreams,” Williams says. She decided to return to MSOE to begin her 12-year journey of completing her bachelor’s degree, squeezing in classes over her lunch hour while juggling a full-time job and raising her 3-year-old son by herself. Sometimes she’d bring her little boy with her to class or to study at the library in the evenings, and she used her six weeks of vacation to fit in an internship. “There were a lot of 14- or 15-hour days,” she says.

But it was worth it.

“MSOE is kind of like a family. It’s not a huge university where you get lost in the mix. Your counselor is like your mom or your auntie, and they’re there for you when you’re having difficulties. Being able to have that relationship with a lot of the educators there is really special,” she says. “Even the students are very supportive and inclusive. You don’t really have your in and out crowds; everyone is working toward the same goals.”

In 2015, at age 37, she graduated with her bachelor’s degree in actuarial science, becoming MSOE’s first graduate of the then-new program.

“It’s a strenuous program, but when you go to job interviews and say you went to MSOE, people kind of raise their eyebrows. Just to have that level of respect for the institution you graduated from is really great,” Williams says. “And once you’ve been in a program like MSOE’s, it trains you to think differently. You know how to ask the right questions, identify the problem and understand the different ways to solve it. That puts you ahead of a lot of other people.”

She started working at Harley-Davidson but wanted a position that used more of her math skills. Today she’s an operations analyst for HellermannTyton North America, a job she found with help from MSOE’s Career Services Center.

“It’s a new position for the company, so the possibilities are endless,” she says. “Math is not everybody’s strong suit. It’s kind of like a foreign language for a lot of people, so being able to be good at math and communicate that to other people is very invigorating and satisfying. I’m dealing with people, dealing with numbers, solving problems. It’s my dream job.” 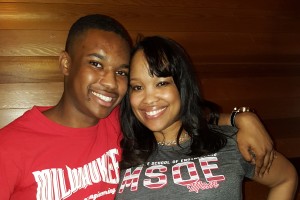 All those childhood years on the MSOE campus must have rubbed off because her son, John, followed in her footsteps, graduating from high school at 16 before joining MSOE’s actuarial science program. A year later, Williams returned to MSOE for her MBA. “I thought it would be cool to go to school with my son,” she says. “I know at MSOE, I’m getting my money’s worth and will learn to be a force.”

And now she and her son meet up for study sessions on campus.

“He’s finishing his first quarter as a freshman, and he loves it,” she says. “We go to the library and study together. It’s kind of a competition right now to see who can get a 4.0.”

Spoiler alert: She won the bet.

Once you’ve been in a program like MSOE’s, it trains you to think differently. You know how to ask the right questions, identify the problem and understand the different ways to solve it. That puts you ahead of a lot of other people.