Morgan Balog ’21 was in her eighth grade Spanish class when the idea hit her to do something special upon her college graduation: hike the Camino de Santiago Trail in Spain. Fast forward nine years and one pandemic and her dream was shot. Little did she know the change in plan would result in something much bigger.

“My plan went down the toilet with COVID-19, so I had to come up with a backup. I was Googling different trails to string something together and the Pacific Crest Trail, Continental Divide Trail and Appalachian Trail came up. I had never hiked in Washington, Oregon or California before, so my decision was made,” said Balog.

So, she started to plan a hike of the Pacific Crest Trail. The 2,650-mile-long trail spans the distance of three states, Washington, Oregon and California, with the northernmost edge on the border of Canada and southern tip in Mexico. Balog had some previous backpacking experience, a week in the Rocky Mountains and Smoky Mountains, but nothing to the extent of one of the longest trails in the United States.

After her graduation from MSOE in May of 2021 she would set off on her journey, but her preparation started long before. She found out through research that her hiking timeframe was not the right time of year to do the northern route so instead she went southbound from Washington to California, a route rarely done. The next major step in her planning was what to take with her.

“It might be the engineer in me, but I used excel sheets! I had a sheet that listed all the food I would possibly eat and the nutrition info/calories to make sure that I was eating enough and eating right. I also had one with all the stops I would take, where to send a box or pick up food in town, how long and the estimated date I would get there. It helped bring peace of mind and support my hike even when the dates were off. I also learned very quickly not to cheap out on hiking gear.”

The entirety of the hike took her from June to November of 2021. Balog faced challenging moments, like facing the physically taxing North Cascades in Washington and having to detour her journey due to California wildfires, but for her the rewards were far sweeter than even the most difficult parts of the journey.

“My favorite section in the whole trail was the Goat Rocks Wilderness and specifically the Knife’s Edge Trail in southern Washington. I could see three volcanos at once – Rainier, St. Helen and Adams. Besides the constant beauty that was around me every day, it was the people I met that made the journey special. I’m still friends with so many of them. Some have visited me and I also have made visits to them.”

Balog, a biomedical engineering graduate, credits in part her education from MSOE to help her along the way not only on the Pacific Crest Trail but also in her career as a new product development electrical engineer at Milwaukee Tool.

“MSOE taught me how to learn, apply what I’ve learned and how to think critically—which also prepared me for the massive problem-solving strategies the trail would require. The trail pushed me to problem solve even if there seemed to be no answer. This thinking has helped me be a better engineer.”

The Palatine, Illinois native says she plans to continue hiking. She hopes to complete the ‘triple crown’ and hike the Continental Divide Trail and Appalachian Trail as she already crossed off the Pacific Crest Trail. Balog also wants to fulfill her eighth-grade dream of hiking the Camino de Santiago, her original inspiration.

You can read more about Morgan’s journey and preparation at her blog baloghikes.com which she hopes is a resource for those who want to take up hiking and get advice from someone whose been in their shoes.

“There will always be an excuse as to not do something. There never is a good time, so to anyone thinking of hiking—do it!” 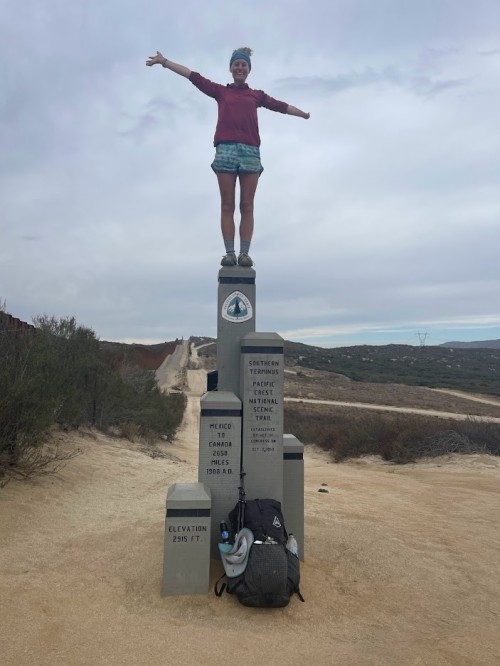