The Museum welcomes visitors to three floors of gallery space where the permanent collection is displayed along with special feature exhibitions. The Museum also has a spectacular rooftop sculpture garden, penthouse, auditorium, library, museum store, lounge and workshop

The renovated, three-story, 38,000-square-foot concrete structure was built in 1924 as an automobile dealership that for many years was called Metropolitan Cadillac, owned by Glenn Humphrey. In more recent times, the Federal Reserve Bank occupied the building until it ceased operation there in 2004. 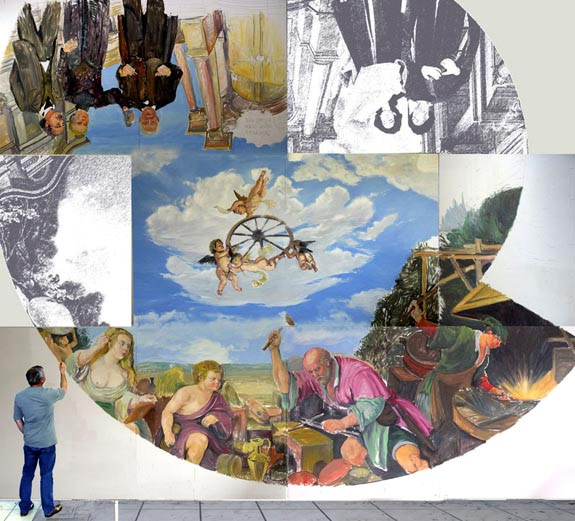 The Grohmann Museum has a magnificent mosaic floor in its glass entryway. Designed by German artist Hans Dieter Tylle and created by German Gabriel Mayer, the mosaic draws on images from the collection and features five images of men and women at work – a farmer, textile worker, blacksmith, foundry worker and miners – plus some of the implements used in these trades.

The atrium dome features eight commissioned stained-glass works that replicate paintings from the collection. Designed by Tylle and created by Mayer, the windows represent men and women in the roles of rolling miller, hay harvester, blacksmiths, carpenter, cooper, quarryman, working at a river valley iron smelter, and building the Tower of Babel.

A dozen large, bronze sculptures – men toiling in the field and foundry, heaving hammers or pinching molten metal with hot tongs – perch on the roofline of the Grohmann Museum. These fellows, each about 9 feet tall and weighing in at a thousand pounds a piece, have a commanding view of a city that was built on the hard work they depict.

The Grohmann Museum is named in honor of Dr. Eckhart Grohmann, an MSOE Regent, Milwaukee businessman and avid art collector, who donated his Man at Work art collection to MSOE in 2001 and subsequently the funds to purchase, renovate and operate the museum that bears his name. Grohmann and his wife, Ischi, are longtime supporters of scholarships for MSOE students and also donated funds to purchase the property for MSOE’s Kern Center.

Grohmann grew up visiting his grandfather’s large marble processing business and quarry operation in Silesia, Germany (now within the borders of Poland). It was there, watching the stonecutters and sculptors select raw material that would soon become a work of art, that Grohmann developed his appreciation and admiration of work.

Grohmann is the former chairman and president of Milwaukee’s Aluminum Casting & Engineering Co., a firm he acquired in 1965 and grew from a small foundry of 35 employees to a company ten times that size when he sold the business in 2007. A successful entrepreneur, Grohmann co-founded Central Control Alarm Corp. in 1980 and developed it into the leading alarm company in Wisconsin before selling it to Ameritech in 1997.

In discussing his gift, Grohmann said:

“Exposure to this collection will help open students’ eyes to the historical evolution of work from its early, modest beginnings and allow them to better understand the roots of today’s production processes.”

Explore and interact with a 3D virtual tour of the museum.

HOLIDAY HOURS: We will be closed during the MSOE holiday break from December 23-January 2.

Host an Event/Book a Tour

The Grohmann Museum is available for your event or tour booking.